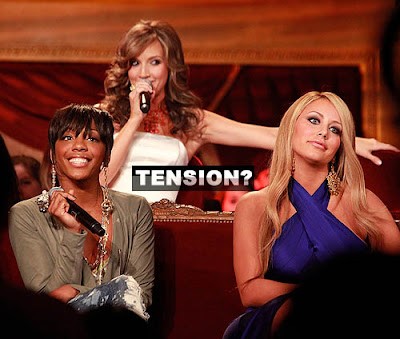 I guess this is still going to run it's course, with Dawn Richards recently laying into member Aubrey O'Day during a recent radio interview.

"Honestly, real talk, she cool, I don't like it when people go in like that and try to pit us against each other" said Richards "Me and her [Aubrey] used to be mad cool, real talk, but this is the reality, I think we're all different personalities and you have to be a certain type of person to wanna deal with that, because if you like drama then that's your person you hang with, but I don't like drama so we didn't click long enough to hang."

Dawn then continued her rant, stating that she felt Aubrey lost the group money by cancelling shows.

"My thing is I like to be part of a business, if you're a part of a brand [then] I like to keep the brand good, ya feel me? I felt like I had other mouths to feed so I would never mess up Shannon's mouth, Aubrey's mouth, D Wood's mouth, and when you start messin' up my money and my home then I have a problem, that was my issue with Aubrey."

"It had nothing to do with her personality, who she is, she's a talented girl, but when you're missin' shows and fans are paying for you and you're the star of the group, I knew it and I was cool with it I was riding the ticket you know, but when you're the star and you don't show up and people know you're not comin', you're messin' up the money you know, that's a problem."