Bam's Sicko of the week 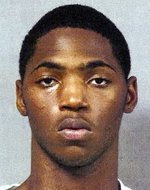 Over the weekend a 17 year old man from New Orleans, LA was arrested and charged with the aggravated rape and first-degree murder of an 8-month-old child.

The man, named Arnold T. Ross, was the boyfriend of the infant’s, Da-Von Lonzo, mother. Arnold admitted to police that he viciously beat Da-Von when he would not stop crying. Then he violated Da-Von anus – causing multiple tears.

Arnold reportedly called for help when the child lost consciousness. Da-Von was rushed to a local hospital - where he died shortly after arrival

Officials said Ross has a lengthy criminal history with arrests for crack cocaine, possession of marijuana, obscenity, battery on a correctional officer, 3 counts of battery on a school teach, 3 counts of theft, illegal carrying of a weapon and assault. Arnold faces the death penalty if convicted.