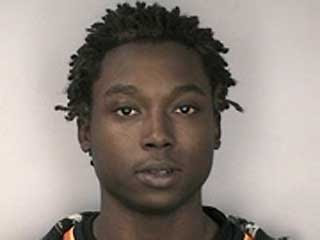 A man was caught in Tampa Tuesday for allegedly throwing his ex-girlfriend's 4-month-old baby out of a car window, killing the child.

Police say he got into a fight with the baby's 17-year-old mother and attacked both of them.

He then fled with the child in his blue Chevrolet Impala.

The baby, Emanuel Wesley Murray, was found dead near the interstate about 4 a.m. just as police were preparing to issue an Amber Alert, FOX affiliate WTVT reported.

The tragedy occurred after police responded to a domestic violence call in the Mirabella Apartments in Tampa about 3:15 a.m. Tuesday, the station said.

The teenage mother told deputies her boyfriend beat her, threw her infant son down on the concrete and then fled with the baby, according to WTVT.

Arrest records show McTear has a lengthy criminal history that includes several battery and assault charges, including domestic battery by strangulation and aggravated assault with a deadly weapon.

He is a fugitive on a 2008 felony battery charge in Hillsborough County, according to the Florida Department of Corrections Web site.