wtf is wolverine and the xmen???? 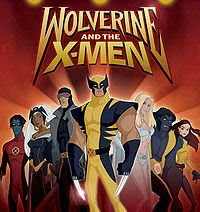 to answer that let me first give you some info on this bogus cartoon that is out right now:

The story starts when the mansion explodes, apparently due an attack targeted at telepaths, in which Professor Charles Xavier and Jean Grey are missing. The X-Men disband and Cyclops begins to suffer from depression. One year later, the MRD (Mutant Response Division) is starting to detain mutants causing Wolverine and Beast to get the X-Men back together. Iceman, Shadowcat and Forge rejoin the team. Rogue joins up with the Brotherhood of Mutants. The X-Mansion is rebuilt with Angel's wealth. Emma Frost is able to locate a comatose Charles on Genosha in the care of Magneto. When hearing this, Cyclops returns to the team and X-Men go to Genosha to find Professor X. After a short confrontation with Magneto, they are allowed to take Professor X back with them to the X-Mansion. Professor X contacts the X-Men telepathically from twenty years in the future and informs Wolverine that he is to lead the X-Men if they wish to successfully prevent a Mutant-Human War that will cause the world to fall under the domination of the Sentinels.

Ok now that you have a glimpse of the first season of it what do you think of this?
(bam's answer) I caught this show one day i was flipping through channels yesterday an it had me a little shocked at what i was watching
I dont like this spin because wolverine was never the leader of the xmen but i guess since his movie came out that networks are trying to make money off of it now.Another things some of the story line for the actual xmen in this cartoon i think is ridiculous..Example 1 in this season jean is openly disrespecting cyclops cause while he is talking to her she is blowing logan a kiss..Now for all my true xmen fans when did jean ever give logan that much attention???lol Example 2 beast is supposed to be a genius but he gets caught in the back of a truck because he cant put on handcuffs?? any genius can put handcuffs on.Im a continue this blog after i catch the next episode of this cartoon on tv