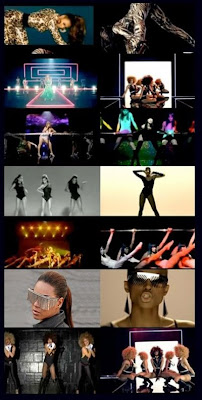 with all the beef staring around this picture to the left Ms. Ciara felt she had to address it. so here is what she had to say:


People are talking about the similarities between Beyonce’s choreography and your choreography. I know what you were going for…

Ciara: Right, I got inspired by the Vegas show, but go ahead. What do you want to know?

How do you even address that? Have you seen the screen grabs?

Ciara:I don’t think there’s really anything to address. I think it’s very, very funny. And you know what my response is to that? For the ones that have something negative to say? They must have really enjoyed it that much to go and nitpick it, because it’s something they pulled up and was like, “Yo!” There were a couple of things in there that I’ve never seen. I think that it’s important for us as artists to be original and to create something new, so it would be really silly of me to go and create something you’ve already seen. So not one time were any of my references another artist.

Ciara: My references were clearly inspired from shows that I’ve actually seen. It goes to show how creative we can be and how close the worlds are. I did my first video with my metal outfit. I was inspired by Thierry Mugler. Now, from my understanding, Beyonce is using Thierry Mugler for her tour. It just is what it is. It’s very petty to me. When people nitpick something and they say negative things, my response to that is they really must have liked it that much. They just said, “This just can’t be! We gotta find something!” That’s also the definition of a person having too much time on their hands to do nothing. That’s how I look at that.

Now after reading this what is your response to what ciara had to say???