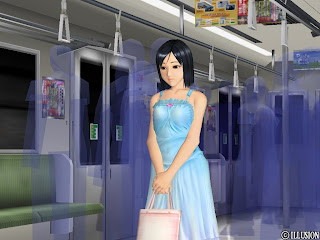 The newest video game 2 come from Japan is entitled, 'RapeLay'. Apparently, this new video game teaches people how 2 prey on females and rape them! Amazon and EBay have banned the sale of RapeLay, a rape simulation video made by Japan-based company Illusion.


The game begins with a man standing on a subway platform, stalking a girl in a blue sundress. On the platform, you can click "prayer" 2 summon a wind that lifts her skirt. She blushes. Once she's on the train, the assault begins. Inside the subway car, you can use the mouse 2 grope your victim as you stand in a crowd of mute, translucent commuters. From here, your character corners his victim in a station bathroom, or in a park with the help of male friends and a series of interactive rape scenes begins. Aside from the “gang rape” aspect of the game, the goal is 2 make women sex slaves without getting them pregnant, and if a player fails he must force the woman “2 have an abortion or risk being thrown under a train and killed.”


the person that created it must be a rapist or one f'd up individual. Cause this doesnt make no sense to come up with a game like this unless u experienced it or plan on doing it. But i bet you this game will sell to all the reformed sexual predators out there because this way they cant get caught. This game i think should be banned cause it is sick,demented,and any other word that can be though of besides sick..I mean what would you say if your kid asked for this game? Or you go to a friends house an this is what is in there system when you turn it on? Just think about that